Tennessee’s Educational System has its mission to prepare students with the skills to succeed in their chosen path in life. Education for all refers to providing individualized support for all students but with a special focus on students that are furthest behind. Programs in special education, English learning, homeless student education, migrant student education with school counseling, and family resource centers have been at the center of improvement efforts. Four educational goals have been set: to improve the graduation rate to where the majority of students will earn post-secondary certificates or degrees, seventy-five percent of third graders will be proficient in reading, the average ACT score will be 21, and Tennessee will rank in the top half of the National Assessment of Educational Progress. Knox County School District alone has 88 schools, including 50 elementary, 16 middle, 16 high and 11 special schools. It employs over 8,300 people and serves over 60,000 students. In addition to the public schools, Knoxville has a large number of private schools. There are 51 top private schools that serve over 11, 000 students. 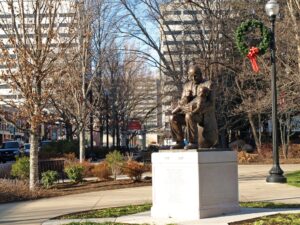 PUBLIC EDUCATION – A progressive, innovative school system responds to the public educational needs of over 56,000 students in Knoxville and Knox county. The Knoxville area gives top priority to the education of its young citizens and focuses on their development into responsible, contributing adults.

The scope and depth of the educational programs offered by the Knox County School System reveals the basic belief in individualized learning. Advanced academic programs for the gifted, as well as special programs suited to the academically disadvantaged and physically handicapped are offered. The system is devoted to the comprehensive high school concept, including advanced placement programs providing college placement credits and a full range of vocational and technical courses for the vocationally talented. Outstanding high school students, in math and science, may participate in the Governor’s School at the University of Tennessee. All high schools in the system are accredited by the Southern Association of Colleges and Schools.

Public Adult Education courses, for those desiring study toward acquisition of a high school diploma, are provided in day and evening classes as well as summer programs. Opportunity for adult technical training also exists.

Commitment to the State of Tennessee’s excellence in education program initiated by Governor Lamar Alexander is a vital element in Knoxville’s renewed spirit in education. Emphasis on recruitment and training of dedicated educators is expanding the ranks of Knoxville’s capable and professional staff of teachers.

TENNESSEE SCHOOL FOR THE DEAF – A state supported residential school (kindergarten through twelfth grade) serves students with severe hearing loss. The school was organized in 1844 and has been at its historic Island Home location since 1924.

Knoxville’s denominational schools are operated by Catholic, Christian, Episcopal, Presbyterian, Baptist, Lutheran and Seventh-Day Adventist religions. Some of these include:

Higher education has become much more important since one of the four major goals of the Tennessee Department of Education has been to increase the number of students that obtain post-secondary degrees. There are 12 colleges in the Knoxville area. The University of Tennessee Flagship is the largest and was the first co-educational institution of higher learning in the state. The Knoxville main campus offers bachelors, masters and doctorate level degrees and over 900 programs of study. The University of Tennessee Public University System has 5 campuses and services nearly 50,000 students. The University is partnered with Oak Ridge National Laboratory and Tennessee Valley Authority in a joint research effort that promotes academic and economic growth in the Tennessee Valley. Other private and state funded institutions continue to expand into the area offering 4 year and technical programs. Numerous grants and scholarships are available to help students further their educations.

The Tennessee Promise Scholarship was established in 2014 and is seen as a landmark scholarship program allowing students tuition-free college. It has been a program that has set an example to be emulated by other states. Tennessee Promise is an expansion to a statewide effort from a local program that began in 2008 and had great success originally in Knoxville. The state of Tennessee was the first state in the country to offer tuition-free community college to all of its high school graduates. A program allowing adults to enroll tuition-free became available in 2018 known as Tennessee Reconnect.

The main campus at Knoxville heads a state-wide university system offering 415 degree programs at the Bachelor’s, Master’s and Doctorate levels. The Knoxville campus recently targeted its enrollment limitations at 27,000 students. The main campus, off Cumberland Avenue, is a 550 acre complex composed of about 220 buildings.

The University has long been the center for the performing arts in Knoxville, as well as the focal point of its nationally recognized athletic programs.

Pellissippi State is a Tennessee Board of Regents college accredited by the Commission of the southern Association of Colleges and Schools. The college has a main campus located on 144 acres in the scenic foothills of West Knoxville. It offers a wide variety of career, technical and college transfer Associate Degree programs and a comprehensive Liberal Arts program. Admissions Office (865) 694-6570.

Knoxville College – one of the South’s oldest and most respected predominately black institutions of higher learning. Founded in 1875, Knoxville college is a four-year undergraduate college.

Johnson University – Education in a Christian environment. Founded in 1893, by Ashley S. Johnson, it is the second oldest continuing Bible College in the United States.

Tennessee Technical Center at Knoxville – established in 1966 to promote job training and placement. The campus consists of two buildings on the east side of Liberty Street and one building on the west side. All classrooms and lab facilities are equipped with state-of-the-art technology that is updated regularly to meet the rapidly changing needs of business and industry.

South College – offers the Associate of Business degree in many business related fields. Originally known as Knoxville Business College, the college has been part of Knoxville’s business community since 1882.

Other colleges within a 100-mile radius of Knoxville are some of the state’s oldest institutions – rich in heritage and tradition:

Within the same area are four junior colleges offering a wide range of two-year programs: